I'm in the process of adding a detachable loader to my 4020. Based on good advice from Gordy at the "other" CCI site, I've decided to add some additional bracing on the bottom side of the transaxle too. I think that others who have a 3pt hitch might benefit from this approach:

I understand from Gordy that when frames break, it's usually right in front of the transaxle, right where the frame rails thin down to go around it.

So my initial plan was to weld some vertical tabs to the rear face of my new crossmember, and bolt in 1" round steel bars from those tabs down to the sleeve hitch lugs on the transaxle. That would give a triangular point-to-point member which would brace the bottom of the transaxle from moving forward. 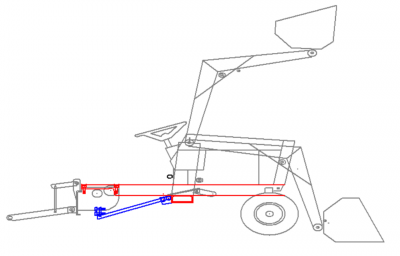 Reality got in the way, though, because the hydraulic motor blocks a straight line from the sleeve hitch lugs up to the crossmember. So the reinforcing bars will have to be bent to go around the motor. No big deal.
But I didn't like one thing about this: The lowest point under the transaxle is now 2 steel "barbs": If you're in deep stuff, the angled round bars will act like skis to ride up over dirt/rocks/mud. But if you try to go backwards, they're going to dig in. I just thought it would be better if I extended the bars rearward, so that they're not just sticking down like two sore thumbs. 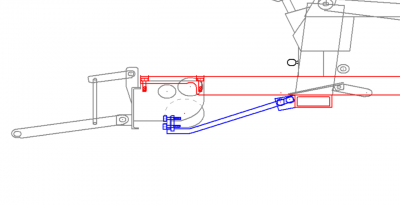 And that led to the "aha" moment: I can extend the bars back to the bottom flange of my 3 pt hitch "plate" and bolt them to it.

Being bolted on, the bars are removable for heavy maintenance. And with them in place, the torque is eliminated at the point where the transaxle meets the frame rail. With this setup, I wouldn't hesitate to put whatever load on the 3 pt that it's capable of lifting, up to the point of whatever weight limit there is for the axle tubes themselves.

Just sharing for the benefit of anyone who's interested.
"Never be afraid to try something new. How hard can it be?"
Top

I have been running the same lower reinforcement links on Frankie for over 3 year now . Wise idea take a lot of the twisting force off the back of the frame .
Dave
Dave
Mad Tractor Builder
Top
Post Reply
2 posts • Page 1 of 1