Yes, along those lines, the forks I bought actually have a couple 3/8 in holes drilled in them. Out towards the tip not all the way. And I can make a place where I could slide this sling adapter I'm talking about in place and put a pin through those holes. Which will keep the adapter locked in place on the forks. Then I can turn the forks pointing skyward and my load will be slung from 7:00 or 8 ft in the air.
"Never be afraid to try something new. How hard can it be?"
Top

I have adjustable forks for my 6018. They came off a b series kubota. I've been wanting to add a grapple to the forks for a long time now. You could slide into a brush pile deeper and hold it down. Or you could slide the forks closer and pick up a rock. The corners of your bucket will limit you. But... you could always make 2 grapples. Lol reusing the hoses and cylinder to swap back and forth.

Eugen, I agree on the distance from the bucket to the front end. I've been wanting to get some measurements off the loader forks on a 7020 for awhile now. I'm very limited with what dump trailer I barrow (lol) I can't get up into and dump in front of the wheels/fenders. They stop me and I can't dump a load into the trailer. I have a project dump trailer I picked up a while back I'll get rid of if I can't get the bucket over the side. I'd like a low deck over with high gwr.

The more distance from the tractor means less lifting capability, The higher you can lift the wider the tractor needs to be.
Every thing has its trade offs .
Dave
Mad Tractor Builder
Top

Well, an update: The new valve is wider than the old one, WHICH means that it has to slide outboard from the old one. WHICH means that it's now directly behind and will be hit by the loader arm at full raise position. WHICH means it also had to slide an inch and a quarter aft toward the operator. So I made up a new 3/16" plate steel mounting plate, and welded it in and painted it and tapped it for a pair of 5/16" bolts and clamped it down.

Ingress and egress are still fine from that side. So far so good.

And the old valve had SAE#8 ports throughout:pressure in, tank out, and all 4 work ports. The new valve has SAE#10 pressure in and tank out. So I had to adapt my QD hoses to that. Pain the the butt, playing fittings Jenga to find a workable transition from "this" to "that". To address an area where the return hose was bent too tightly, I removed the vertical pipe leading to the return and cut it about 3 inches shorter and rethreaded it. That hose is much happer now. So a lot of messing around, but I found a workable setup.

And the new work ports, though they are the same SAE#8 as the old valve, are physically closer together than the old valve. So my swivel hoses had to be at more of a right angle to the valve to be able to fit/nestle next to each other. This, combined with the fact that the new valve is 1.25" farther aft, meant that one of my hoses was just too short to reach. So I had to remove the center support cover and pull some new slack for that hose, beginning at its far end and working it tighter through every clamp/strap that it goes through. I found JUST enough slack.

I already had some SAE#8 male to JIC6 Male elbows, one tall and one short. The height difference is necessary to be able to screw them in next to each other, otherwise the sticking out/horizontal part hits the fitting next to it. So you screw in the short one first, and then the tall one "helicopter blades" over top of it. HOWEVER, they make a "normal", a "long" and an "extra long". And I have a "normal" and "long". But to get both fittings to point straight forward, one fully over top of the other, (not angled at all) you have to have a "normal" and an "extra long". So I headed to the lathe and made an SAE#8 extender: A fitting with SAE8 male one one end and SAE8 Female on the other. So put that on the "long" side, and that jacked the "long" fitting way up into "extra extra long" territory.

I simply connected my two long hoses to the valve's center spool, and installed a set of male/famale QD's on the other end. And connected them to each other, making a big long loopback hose.

Finally I started it up and leak checked it. I had a huge leak on one of the JIC6's for the new hoses. Apparently "not quite finger tight" isn't good enough for 2000+ psi. Who'da thunk it?

Everything else was fine. 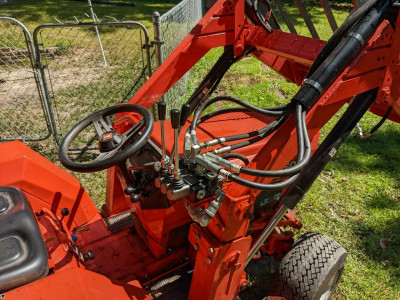 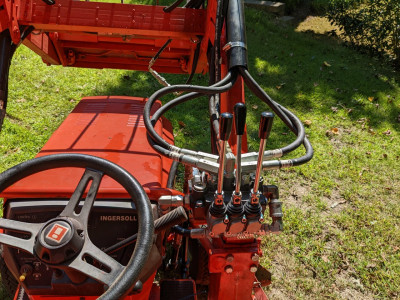 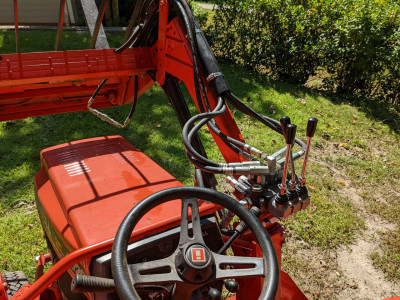 NOW FOR THE RESULTS:

Ever since my loader was brand new (about 8 weeks ago

But now, you can just put the boom and bucket where ever you want them AND IT JUST STAYS THERE.

Crazy. I have never had a loader that does that before.

Bob
"Never be afraid to try something new. How hard can it be?"
Top

Bob, my wife would've said "I told you to buy a quality product!"

Sadly, in this age of cheap, new doesn't mean it's even decent quality. I'm glad you fixed this, and the fix in fact was not a lot of $$. Now you will enjoy your loader without reservations!