It was running great for a while and then it started to show signs of starving for fuel. I suspected the tank and fuel line to the pump even before, hence I installed the fuel filter.

Decided to take the carb bowl off take a look. Sure enough, there was sediment. Took the filter off, look what came out of it, from the tank side. But some fine dirt was also coming from the clean filtered side. 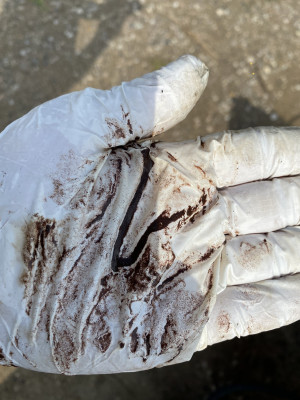 So, time to fix it right. 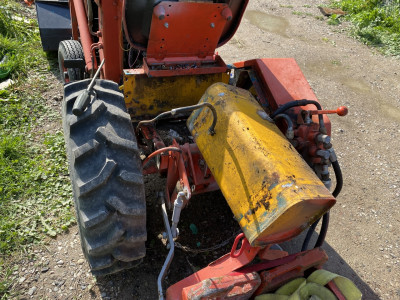 Yep, time to clean the tank out for sure. That should fix starving for fuel situation.
Top

What's your best way to clean up a steel tank on the inside?

Put your gravel or old nuts and bolts in tie it to the back wheel of one of your other tractors and go for a ride. I usually flush it with diesel fuel and do it again. 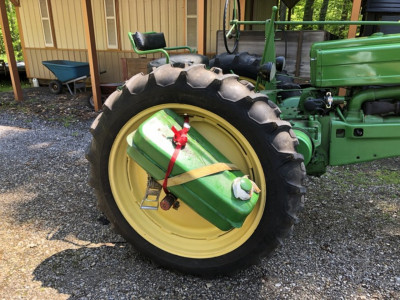 I wish I had asked this earlier. Could have tied it to the 444 rear wheel, lift the wheels off the ground and run it on low speed for a while.

The kids just didn't want to fall asleep 'til late so I made it to the shop late too. Thought I have a look at the fuel pump as a way to relax a little. The pump that came with this k321 engine is not an original Kohler, rather one of those newer plastic ones. The diaphragm looked fine, so did the two valves. When trying to set the diaphragm back in I noticed the hooking piece at the bottom was now missing. Hm.. the diaphragm is like a mushroom, and it's leg goes in then rotates 90 degrees and it stays put. Took the base apart and what do you know.

This is the lever that gets actuated by a cam inside the engine. That tab is where the leg of the mushroom diaphragm gets attached, and it's broken from the lever.

My guess is that the pump was working occasionally because the lever would sometimes catch on that broken tab and pump a little, only to go off again and starve the engine. There, I relaxed.

I have strapped a tank to cement mixer I have with handful of gravel really helps get the worst out. Then after rinsing with a bit of methalhydrate phosphoric acid (Krud Kutter for rust) swish around drain and allow dry time . In a steel tank some of that "dirt" is rust partials . Swish again with some gas . Then back together .
Last edited by DavidBarkey on Mon Sep 19, 2022 12:38 pm, edited 1 time in total.
Dave
Mad Tractor Builder
Top

A safe way to clean it out would be vinegar and baking soda. Otherwise a strong acid wash would do the trick.

The problem is that the differential spins the other wheel and this stops so I had told go back and forth. Maybe a good thing that I couldn't leave it running unattended and find it in the neighbour's yard.

LOL, well it beats doing it by hand! How does the tank look?
Top
Post Reply
23 posts